Ryotanji Temple was founded in 733 CE and is a Zen Buddhist temple of the Rinzai sect, located north of central Hamamatsu close to the banks of the Iinoya River. The temple structures exemplify several aspects of traditional Zen temple design, such as the stately gable of the priests’ quarters and the vermillion color of the multistory founder’s hall pavilion. All six of the main buildings are protected as Important Cultural Properties. Ryotanji is the ancestral temple of the Ii family, a prominent Japanese family that traces its roots to the year 1010 and includes a number of important figures throughout Japanese history. The garden at Ryotanji was built one generation after the family had overcome dire circumstances that threatened their survival, as a place that successive generations would be able to return to, to pay respects to their ancestors.

Today, Ryotanji is well-known for that garden, located behind the main hall, which was nationally designated a Place of Scenic Beauty in 1936. The garden was designed by renowned artist and aristocrat Kobori Enshu (1579–1647), who also designed a large number of other notable Japanese gardens.

History of the Temple 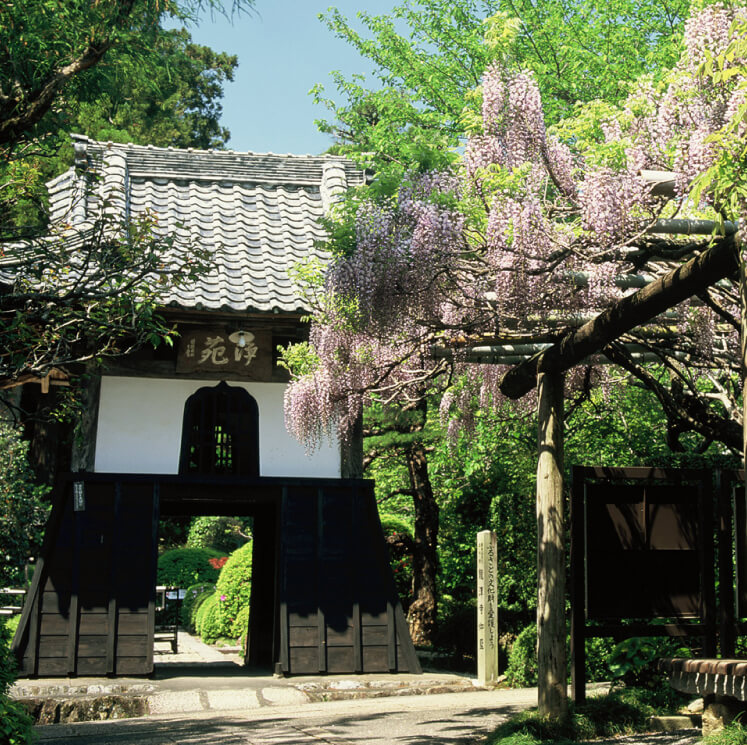 Ryotanji temple has been linked with the Ii family for many generations and is located in an area that was originally under their control. The site is an out-of-the way agricultural area where a temple the size and scale of Ryotanji would not normally have been built, and its development is due in large part to their donations. The founder’s hall pavilion is a rare example of a multistory structure in the area, and crests of the Ii family can be seen on the tiled roof.

During the Edo period (1603–1867), the Ii family gained influence, eventually being promoted to the post of lord of Hikone in modern-day Shiga Prefecture. Despite the family’s move, Ryotanji remained their ancestral temple and the Buddhist memorial tablets of successive heads of the Ii family are still housed throughout the complex.

The temple garden is over 350 years old, and the rocks, shrubs, trees, and moss bed have been carefully placed. Like the temple itself, the garden was designed to show respect for the ancestors of the Ii family, with the building housing the mortuary tablet installation placed in way that the building could be seen from the temple’s study.

The Garden of Ryotanji Temple 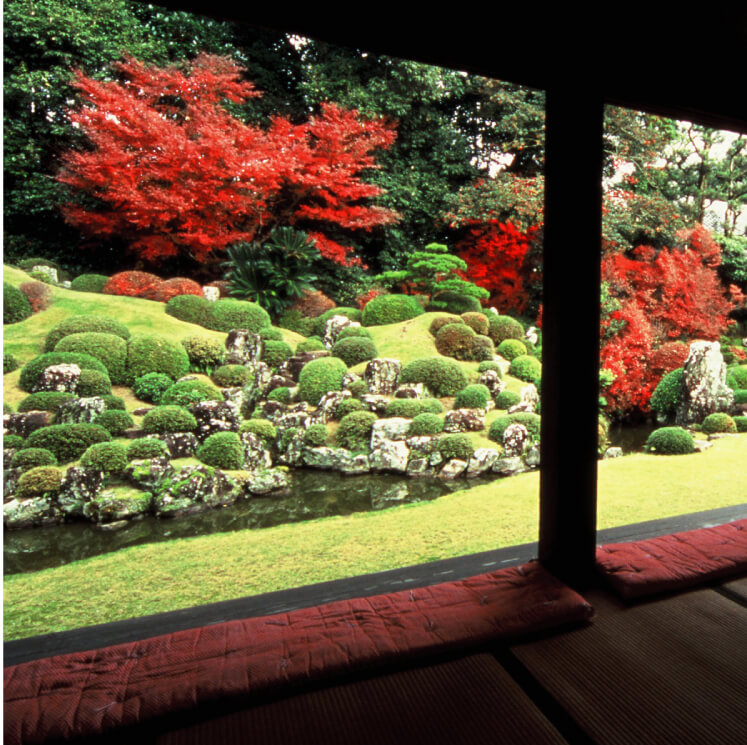 Ryotanji’s garden was designed by Kobori Enshu (1579–1647) in the chisen kansho or “pond-appreciation” style, a design best viewed from one spot––in this case, the main hall. The pond is designed in the shape of the kanji character for “heart” or “spirit.” The garden features a number of traditional elements of Zen temple gardens such as water and stones, as well as a variety of plants placed around rock formations that represent mountain ranges.

These miniature mountain ranges are three mounds of grass-covered earth and are surrounded by stones from the local mountains. In the center of the garden near the base of the central mound is a large stone that is the symbol of the garden. Flanking this on the western edge of the pond is the nio stone, which protects the garden. In the center of the pond is the horai ganto stone, which symbolizes Horai, the legendary home of the eight immortals in Chinese mythology.

The round azalea bushes in the composition bloom a brilliant pink in late spring. These are complemented by heather shrubs (dodan tsutsuji) with delicate white flowers in spring and deep red leaves in the autumn. The entire garden is designed in the shape of a turtle and a crane, which are recurring motifs in Japanese culture that symbolize longevity and happiness, respectively. 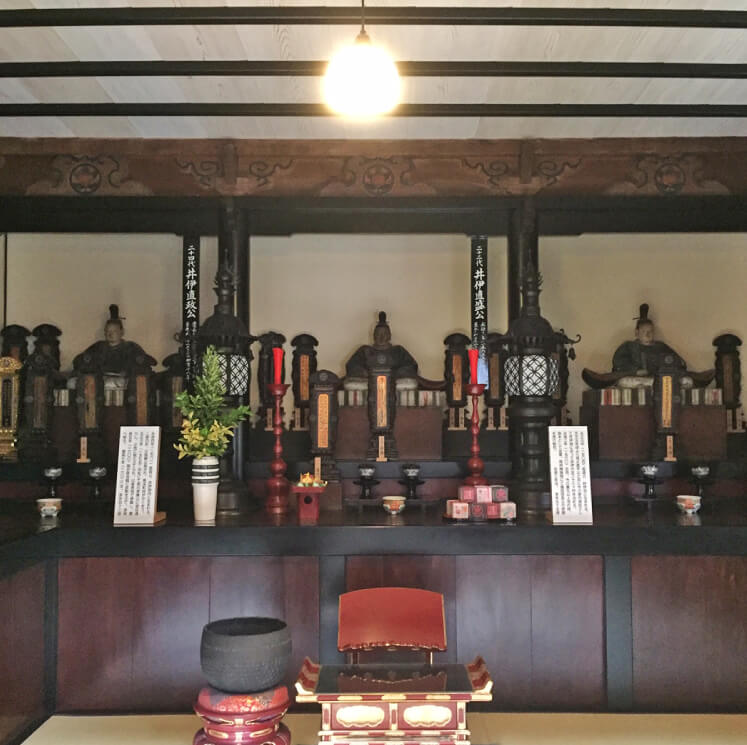 Ryotanji Temple is the ancestral temple of the Ii family, a historically powerful Japanese family that traces its roots to the Hamamatsu area. Legend states that a baby found next to the well near the entrance of the temple in 1010 grew up to become Ii Tomoyasu (1010–1093), the first head of the Ii family and lord of Iinoya Castle.

Centuries later, during the period of civil war from the mid-fifteenth century to the early seventeenth century, the Ii family was in danger of destruction and losing their land. Ii Naotora (d. 1582), one of the last survivors of the crisis, was instrumental in saving her family. She ensured that the only male heir, her adopted son Ii Naomasa (1561–1602), allied himself with Tokugawa Ieyasu (1542–1616), the founder and first shogun of the Tokugawa shogunate that ruled Japan for over 250 years until 1867. Ii Naomasa became one of Ieyasu’s top generals and was awarded the domain of Hikone (in modern-day Shiga Prefecture) after Ieyasu’s final victory. Thereafter, the Ii family was based in Hikone, however, they still retained Ryotanji as their ancestral temple.

The Ii family continued to be influential in politics throughout the rule of the Tokugawa shogunate. Ii Naosuke (1815–1860), the penultimate lord of Hikone and a high-ranking official in the shogunate, was noted for his involvement in signing the Harris Treaty with the United States, which opened Japan to American trade after almost 250 years of near total isolation. 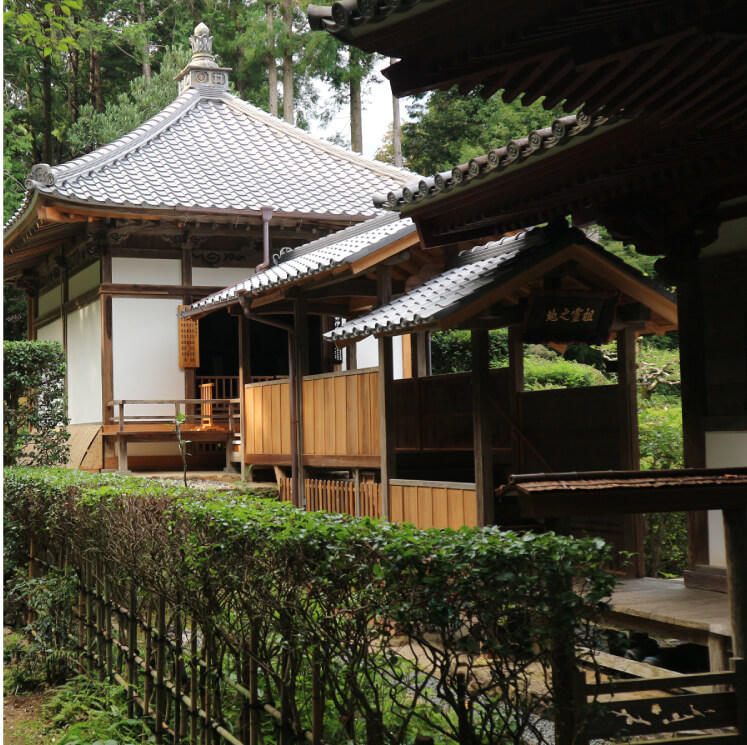 The buildings of Ryotanji are between 200 and 400 years old, and the main worship hall (hondo) was rebuilt in 1676. The hall features a nightingale floor, a security device which makes a sound like that of a nightingale singing when stepped on, thus warning of the presence of intruders. The floor has been attributed to Hidari Jingoro, a possibly fictitious Edo period (1603–1867) sculptor who is believed to have carved the famous “sleeping cat” of Toshogu Shrine in Nikko. The wooden dragon over the doorway in the main hall is also attributed to Jingoro.

The rear of the main worship hall looks out onto the pond garden. While attractive from any angle, the garden is best viewed from the seat of the guest of honor in the dining room to the east of the garden. Those privileged enough to be seated there could enjoy the garden views while also being closest to the door in order to escape should there be an attack on the temple.

Other buildings include a teahouse and the Ii family mausoleum, where ancestral tablets of previous Ii lords are enshrined, including that of Ii Tomoyasu (1010–1093), the founder of the family. Throughout the temple complex are other exquisite carvings, screens, and images of the Buddha that have been preserved for hundreds of years. 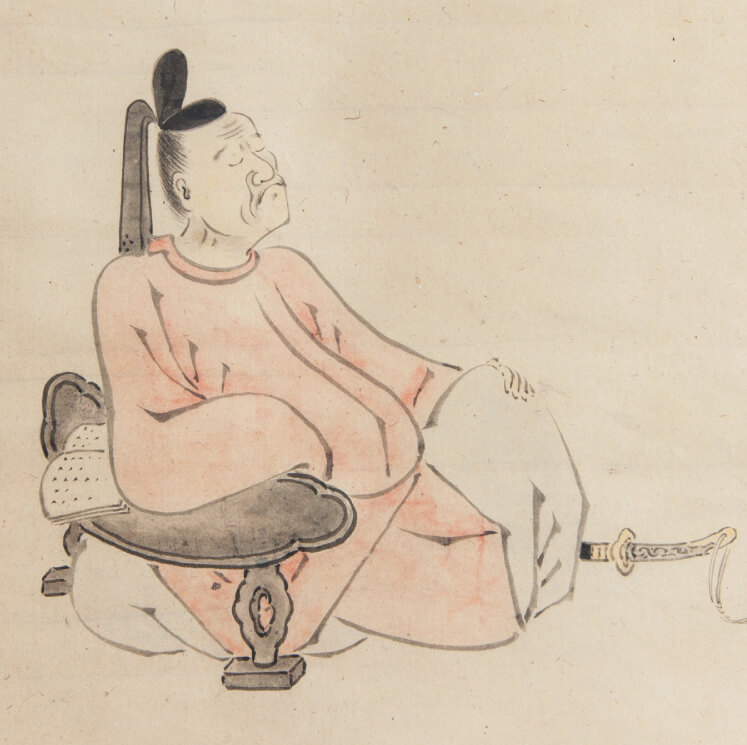 Kobori Enshu (1579–1647) was a renowned artist and aristocrat active during the start of the Edo period in the early 1600s. Enshu is thought to have created the garden at Ryotanji on the request of Ii Naotaka (1590–1659), the 25th lord of the Ii family.

Enshu was the lord of a domain in Omi Province, located in present-day Shiga Prefecture. He is best known as a master of the tea ceremony, and the style he developed, known as Enshu-ryu, is still used by tea ceremony practitioners today. Enshu was even tasked with teaching the third Tokugawa shogun, Tokugawa Iemitsu (1604–1651), the way of the tea ceremony. His other pursuits included architecture, flower arrangement, and pottery.

A number of gardens, temples, and castles throughout Japan were designed by Enshu. These include the gardens of Nijo Castle and the Katsura Imperial Villa in Kyoto, along with the keep of Nagoya Castle. Enshu established the kirei sabi design style which, in contrast with the more widely known and austere concept of wabi sabi, combined gracefulness with simplicity, and has roots in Heian period (794–1185) aesthetics. Enshu’s gardens are known for their harmonic balance and the use of boldly colored flowers, both of which can be seen in the garden at Ryotanji.