Okuni Jinja Shrine, which appears in records from as early as 840 CE, is a Shinto shrine located to the northeast of central Hamamatsu. The shrine stands at a site believed to be a middle ground between the realm of untouched nature and the human world. A long, wide path lined with thick cedars leads the shrine buildings, which are revealed at the end of the passage. A river flows past, and dense forest lies beyond the shrine, encompassing the site as a “garden” in a broad sense of the word. It is place for humans to revere the nature that the shrine protects. While the spirits worshipped at Okuni Jinja are too many to count, the main kami is Okuninushi no Mikoto, who is depicted as kind-hearted and a bringer of blessings. Okuninushi no Mikoto also appears in the Kojiki (Records of Ancient Matters), a chronicle of Japanese myths, legends, and oral traditions written in 712 CE.

The Shinto priests at Okuni Jinja hold more than 400 rituals and festivals every year, praying for world peace, tranquility, and bountiful harvests. The public is welcome to watch or participate in a number of these rituals. 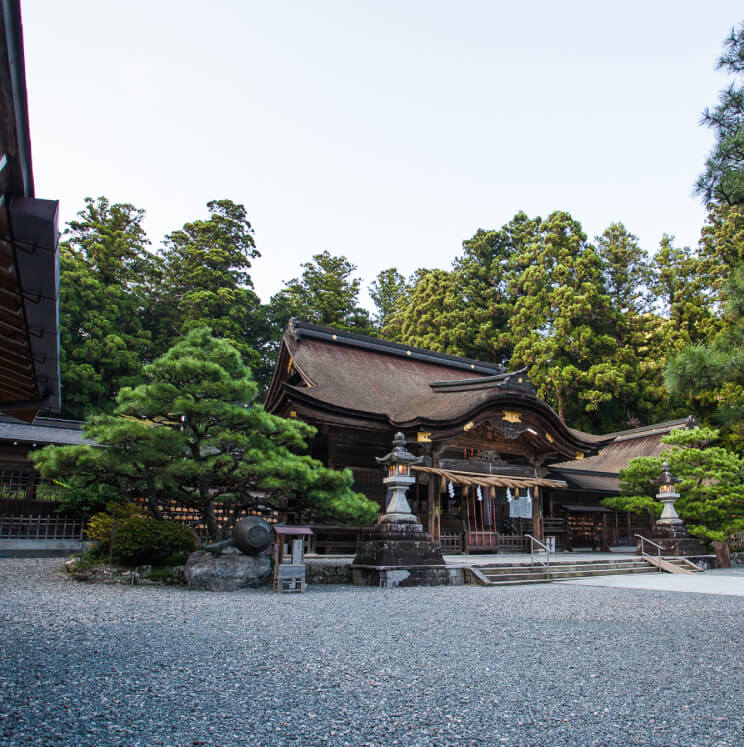 Okuni Jinja and its surrounding areas offer a glimpse into how our ancestors coexisted with nature. The natural environment around the shrine has been carefully preserved for hundreds of years, and logging is forbidden within the sacred grounds. Enormous and ancient trees lining the entrance to the main shrine instill a sense of quiet grandeur when entering the realm of the kami.

Respect for nature is expressed in the sustainable construction of the shrine buildings, where bark harvested from local trees is used as roofing material. The harvesting process does not harm the tree, and subsequent bark from the same tree can be used for future construction. Sustainability has been important in this area for generations to ensure that supplies of precious natural resources do not run out.

Many Shinto rituals celebrate the changing seasons, and this is reflected in the flora at Okuni Jinja, with delicate pink and white cherry blossoms in spring, deep forest greens in summer, rich red leaves in autumn, and mountain wildflowers in winter. Visiting the shrine and its surroundings promotes an understanding of the connection between traditional Japanese spirituality, nature preservation, and worship. The elegant wooden shrine buildings are set in a dense cypress forest nestled at the base of Mt. Hongu. The fiery red and gold leaves of autumn are particularly admired. 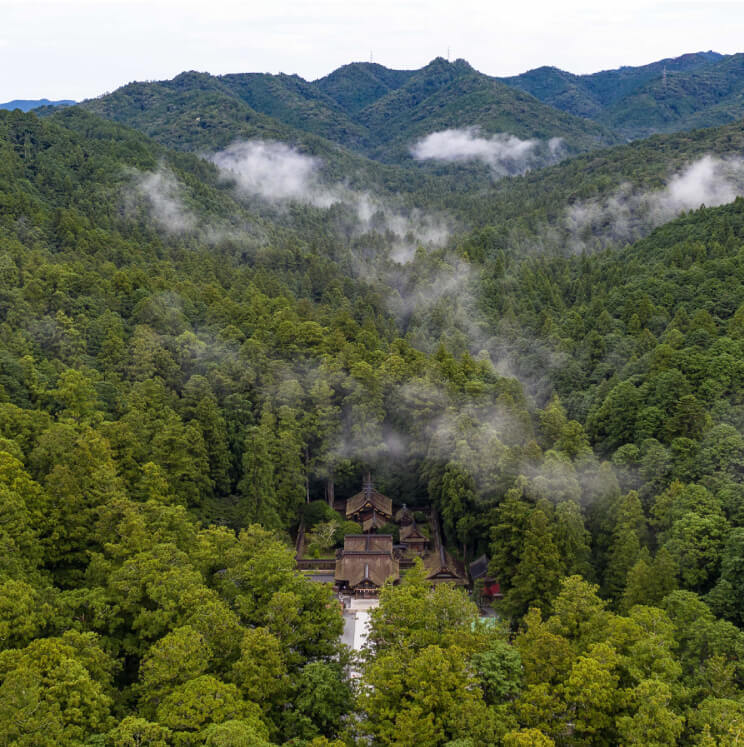 During the Edo period (1603–1867), present-day Shizuoka Prefecture was divided into Izu Province, Suruga Province, and Totomi Province. The area that is now Hamamatsu was part of Totomi Province, and its Shinto shrines were ranked in order of prominence, as was the case in other provinces across Japan. The most prestigious shrine in a province was called ichinomiya (“first shrine”), a ranking bestowed by an imperial envoy based on a shrine’s history, size, and the amount of support it received from prominent local families. The ichinomiya of Totomi Province was Okuni Jinja.

Okuni Jinja is also linked with Ieyasu (1542–1616), the founder of the Tokugawa shogunate, which ruled over a unified Japan during the Edo period. Prior to this period and before Ieyasu received the title of shogun, powerful warlords were in a state of near constant conflict. After a disastrous defeat at the Battle of Mikatagahara in 1573, Ieyasu stopped to pray at Okuni. He sat on a stone for a while before continuing on his way to successfully capture a castle. The stone is now placed near the entrance of the shrine so that visitors may sit on the stone and contemplate how to achieve recovery after suffering a setback.

The shrine and surrounding forests of Okuni Jinja are considered sacred ground, described as a yuniwa. The word is a combination of two kanji characters, the first meaning “purification” or “worship,” and the second, “grounds,” and appears in the Nihon shoki, a chronicle completed in 720 CE. Within the concept of yuniwa, the notion of consecrated ground is combined with elements of prayer and purification to honor the deities, or kami. The idea of yuniwa is central to Japanese spirituality and can be found throughout Shinto.

The yuniwa of the gods is believed to have been the place from which the deity Ninigi no Mikoto, grandson of goddess of the sun Amaterasu Omikami, originally brought rice plants to Japan. Rice thereafter became the country’s staple crop, and is accorded great importance in the Shinto belief system. A festival is held at Okuni Jinja each autumn to thank the kami for their gift of rice. 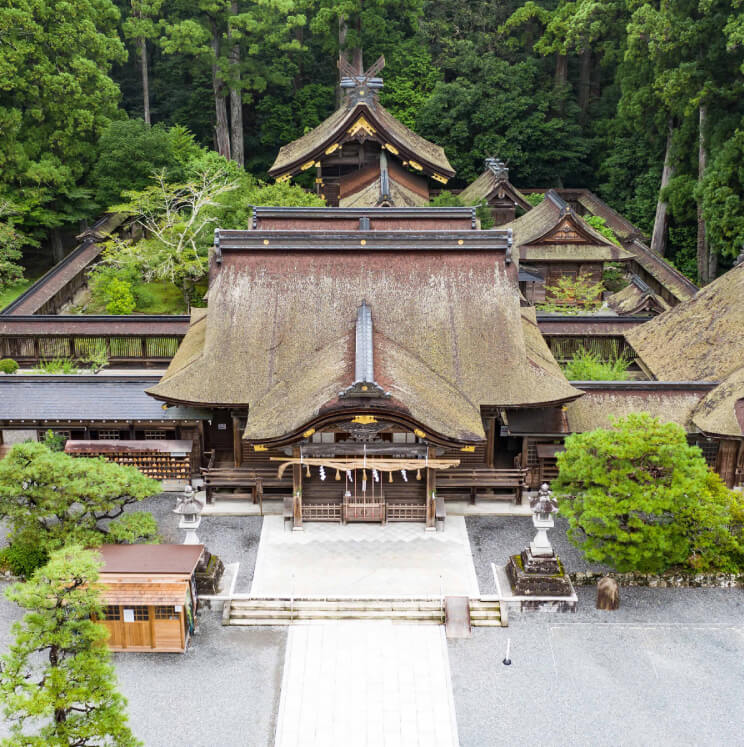 The precincts of Okuni Jinja Shrine contain a number of buildings, with the inner sanctuary, known as the honden, at its heart. This is where Okuninushi no Mikoto, a god of agriculture and nation building and a central deity in Shinto, is enshrined and worshipped. The honden is built in the taisha-zukuri style, with the gabled roof adorned on both ends by forked finials composed of two crossed poles. Taisha-zukuri is the oldest method of shrine construction, and is thought to have originated from ancient palaces that were used for worship.

Roof of structures built in the taisha-zukuri style are normally thatched or shingled with tree bark. The roofs at Okuni Jinja are shingled with bark from hinoki cypress trees, which grow in the forests surrounding the shrine. The bark is carefully removed from the tree, dried, then laid onto the roof. The new bark that later grows back on the tree can be harvested as well, making taisha-zukuri a naturally sustainable style of construction that has been in use for over 1,300 years. Okuni Jinja is rebuilt every 30 to 60 years, ensuring that its architectural style is preserved from generation to generation. 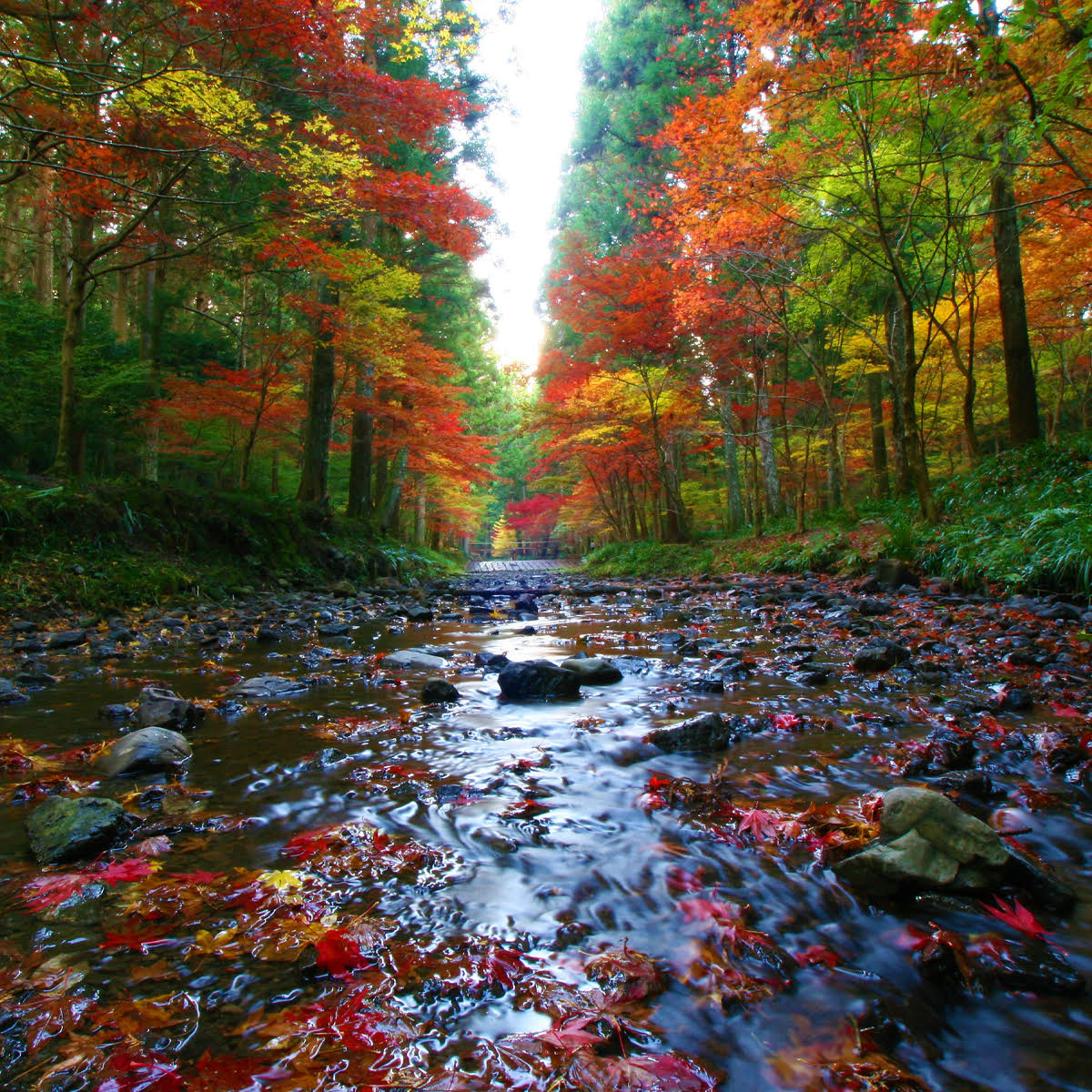 The clear waters of the Miya River spring from the top of sacred Mt. Hongu, the place where the kami Okuninushi no Mikoto was first worshipped. The water of the Miya River is so clean that tea can be made with it. Also known as “the river that gives life,” the river nourishes farmland and fishing areas on its way to the Pacific Ocean.

Okuni Jinja Shrine is one of the relatively rare shrines in Japan located adjacent to a river. Water plays an important role of purification in Shinto, and the priests at Okuni conduct rituals in the river on the sixth of every month. All are welcome to observe.

The river is also a place for rest and relaxation, and the Japanese maples and other deciduous trees lining the riverbank turn from a deep, verdant green to a variety of spectacular autumnal colors. On sunny days, families often play together in the shallow waters, and people come to stroll along the riverbanks and picnic under the trees.