Kasui Yuri no Sono Lily Park comprises over nine hectares of land located to the east of Hamamatsu dedicated to the cultivation and display of lilies. The park opened to the public in 1984 and remains almost solely focused on this herbaceous flower. The park is designed with large, open areas and plenty of paths and seating for fully appreciating the colorful and fragrant lilies that encircle a central pond.

Overlooking the pond are a tea house and a gift shop where lilies can be purchased. Lilies are also featured in the restaurant menu in items such as lily tempura, a dish of edible lily bulbs crisply fried in delicate tempura batter, served with chilled soba noodles on the side.

Kasui Yuri no Sono is open for about 40 days per year when the lilies are in bloom. This normally falls from late May to early July, and tens of thousands of visitors from all over Japan and overseas visit the park annually. Checking the opening dates in advance is advised, as they vary from year to year. 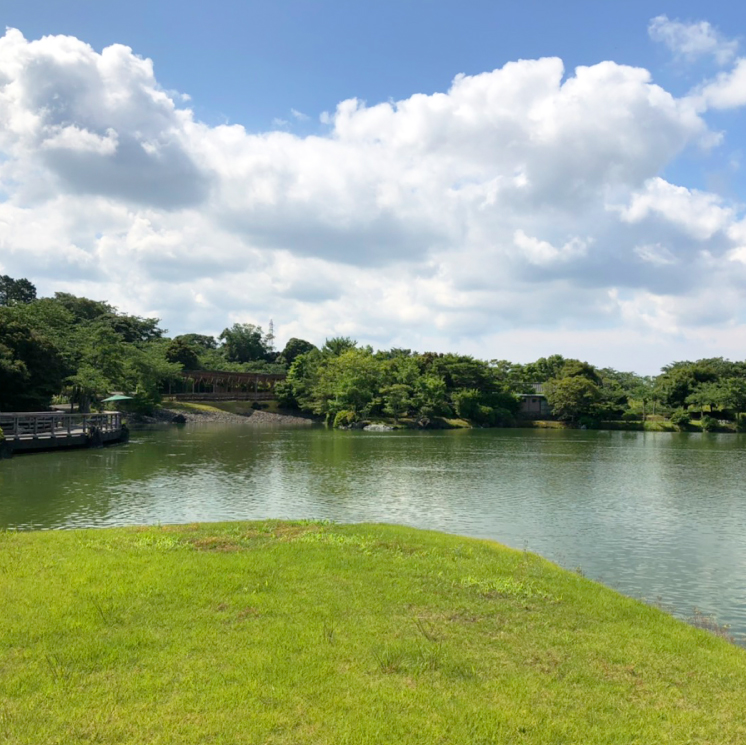 The lilies at Kasui Yuri no Sono bloom in five different colors, and the “five-color field” features long rows of lilies in red, yellow, pink, white, and orange that contrast with the lush greenery of the surrounding forest. Benches are strategically placed in areas with the best views of the lilies.

All of the park’s flower displays were designed and built by the founding director, Kawamura Yoshimasa. Kawamura built the park in the late 1970s despite having no experience with horticulture. He rented sloping land from the adjacent Kasuisai Temple, as he found it worked well for lily cultivation, and mountains were literally moved in order to shape the land into its current form. The large pond, complete with a waterfall, is the home of koi (carp) and turtles, with egrets coming to rest on the rocks from time to time. The surrounding hills and valleys are all man-made, designed to provide optimal backdrops for views of the pond. The entire construction process for the whole park was completed in only four years.

A photo contest is also held at the park every year, with the winning entries displayed near the gift shop. 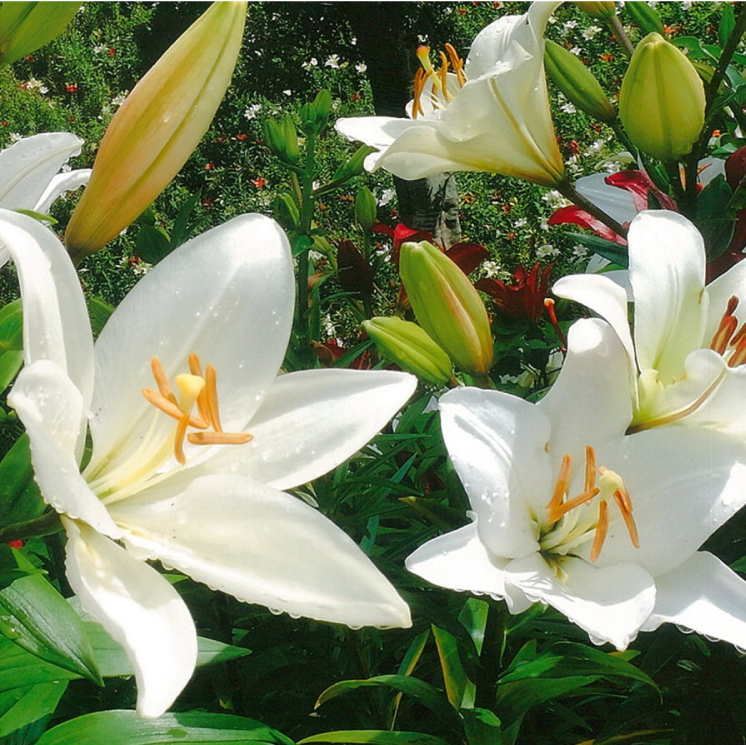 Around two million individual flowers from over 150 varieties of lilies are grown at Kasui Yuri no Sono. Native varieties are considered difficult to maintain, and the majority of plants cultivated in the park are imported from the Netherlands. Each bulb is meticulously selected, and quality is prioritized over cost when acquiring new lilies.

At the beginning of the display season, the “openwork lily” (sukashi-yuri), named for the gaps between its open petals, is in full bloom, followed later by various hybrid varieties. Care is taken to ensure that many blossoms are on display during the park’s entire 40-day opening period.

A preference for hybrid lilies over heirloom varieties allows the staff to have more flexibility in developing new strains that are both visually appealing and better suited to the park’s particular environment. The gift shop sells a selection of rare lilies that are hard to find commercially, including the dwarf “tiny lily” series ideal for gardens with limited space, as well as the larger, double-flowered (yae-zaki) lilies that give the impression of two lilies blooming together, one within the other. 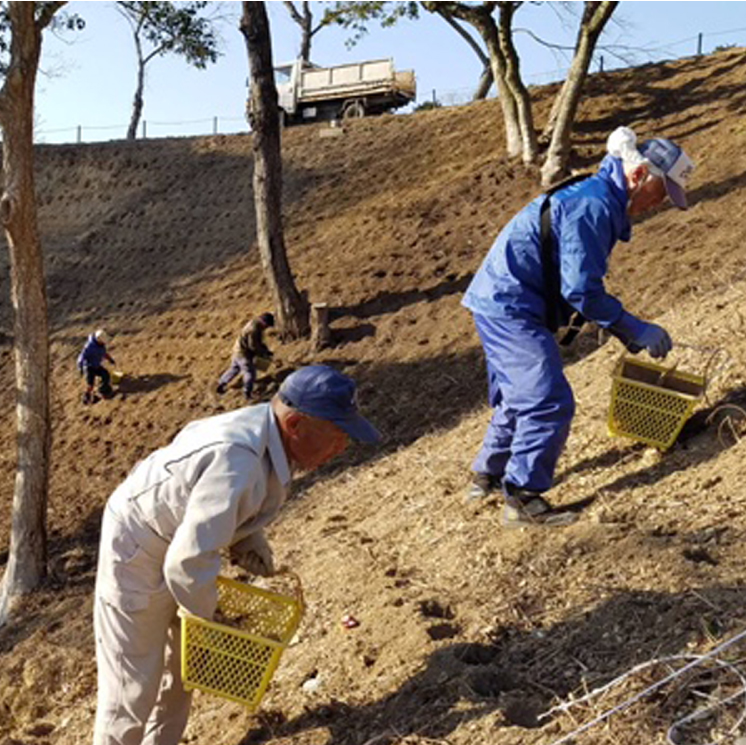 Considerable work is necessary to create optimal blooming conditions for the lilies. Bulbs are planted and tended by hand, and budding plants are observed constantly for the slightest sign of disease. Irrigation and drainage are also crucial elements in creating such large lily fields, and the hills and slopes of the fields are equipped with a built-in pipe system beneath the surface to serve these purposes. In addition, discrete boundary fences and traps in the surrounding forests keep out pests such as wild boar and deer.

The staff at Kasui Yuri no Sono work year-round to ensure that only the most visually pleasing blooms are on display during the limited opening season. As opening day nears, the park’s focus shifts to grooming the plants during their final stages of growth. Dead leaves are pruned by hand, and the stems continue to grow up to a meter in length. This trimming brings out the vibrant colors of the flowers and allows the blossoms to stand out against the green fields behind them. 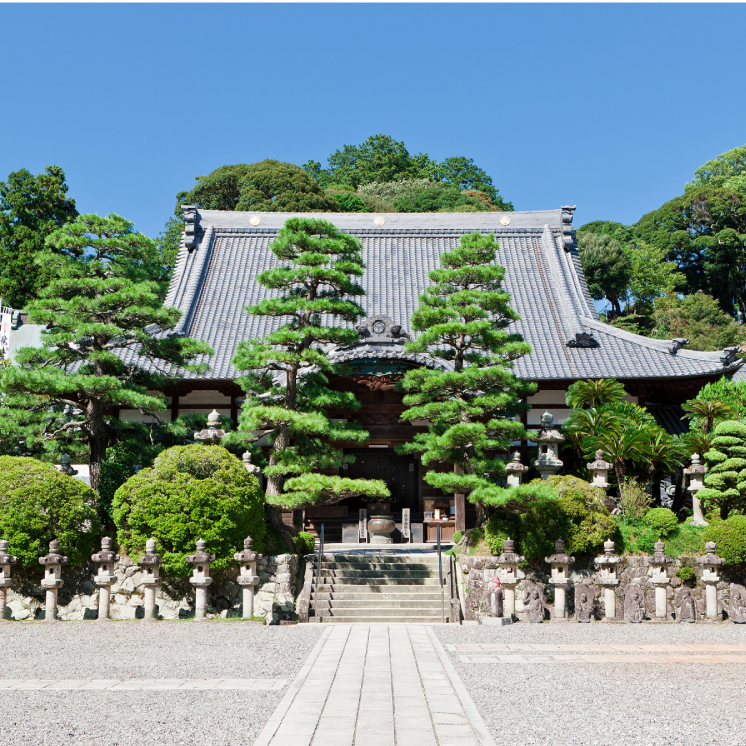 Just northwest of Kasui Yuri no Sono Lily Park is Kasuisai, a temple of the Soto Zen school of Buddhism. The temple, built in 1401, was originally named Toyoken Temple, however, its name was changed after an event involving Tokugawa Ieyasu (1542–1616), the first of the shoguns who ruled the country during the Edo period (1603–1867).

Ieyasu spent much of his childhood as a hostage in order to secure military alliances, and the 11th generation abbot at Toyoken was in charge of his education during some of that time. Years later, when Ieyasu was lord of the castle at Hamamatsu, he invited his former teacher for a visit. The monk fell asleep during their conversation, yet Ieyasu allowed the old man to sleep in his presence, an act usually forbidden, which seemed to show his affection for the abbot. Thereafter, the abbot became known as “the sleeping monk,” and the temple he oversaw, Toyoken, came to be known as Kasuisai, meaning “the temple where one can sleep.”

At the temple, protective amulets said to bring peaceful rest are available. Activities include Zen meditation and learning about the temple’s numerous historical treasures. Vegetarian cuisine prepared by the monks is served if pre-ordered at least a week in advance. A wind chime festival is held from late May, when thousands of wind chimes are displayed around the temple grounds to welcome the advent of summer.