Kamo Garden is a garden park and plant nursery with a long history, located in the thickly forested mountains east of Hamamatsu. The full name of the garden translates roughly as “flower and bird gardens of the Kamo family estate,” and the Kamo family has been in residence in the area for over sixteen generations.

The main attraction is the large Japanese iris garden at the center of the park, and the busiest season is from May through June when the iris garden is in full bloom. The gardens also feature a lotus pond and hydrangea bushes in various colors. Another popular activity is birdwatching, as ducks and parakeets can often be spotted around the park.

Kamo Garden is also known for its buildings that date back hundreds of years, and which have been preserved in their original condition. These buildings were the inspiration for several Japanese anime series, including the popular 2012 high school drama Hyouka.

Activities include touring the old estate buildings, viewing new flower varieties being developed in the nurseries, and barbequing. Both the gardens and greenhouse have dining facilities where a selection of traditional desserts and snacks are served, such as rice wrapped in bamboo leaves (chimaki). The gardens and buildings are open year-round, and admission varies from \1,000 to \1,500 depending on the time of year, with discounts for seniors. Children elementary-school-age and younger are allowed entry for free. 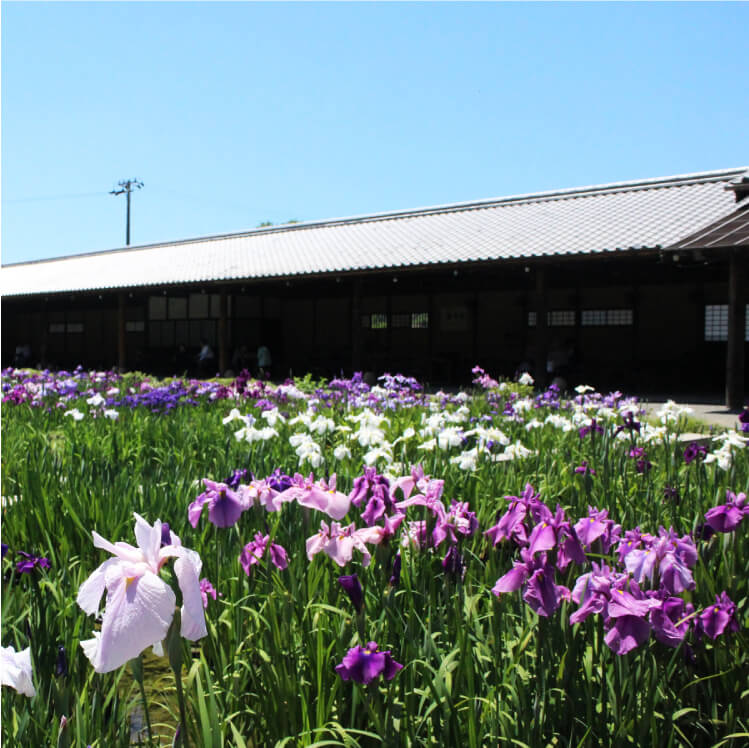 At the main entrance to Kamo Garden, the traditional wooden gate and buildings topped with ridged tiles contrast with the dense forest of the surrounding mountains. This scene has changed very little over hundreds of years, and the road that approaches the gate has also been left in its original state since its construction during the Edo period (1603–1867). Travelers at the time would have passed by here as they journeyed along the old Akiha road to pray at the nearby Akiha Jinja Shrine. The Kamo estate gradually developed into a rest stop along this route, with passersby stopping to enjoy the Japanese irises planted outside the gate.

Since then, the estate has become a popular place for cultural figures to visit and stay, and while the horse-drawn carts, palanquins, and foot travelers that once passed the gates have been replaced with guests arriving in cars and buses, the atmosphere inside has remained the same for centuries.

The buildings are almost 250 years old, and strolling past them while taking in the beauty of the gardens is like stepping back in time. The hard work of generations of the Kamo family is evident throughout the carefully maintained gardens. 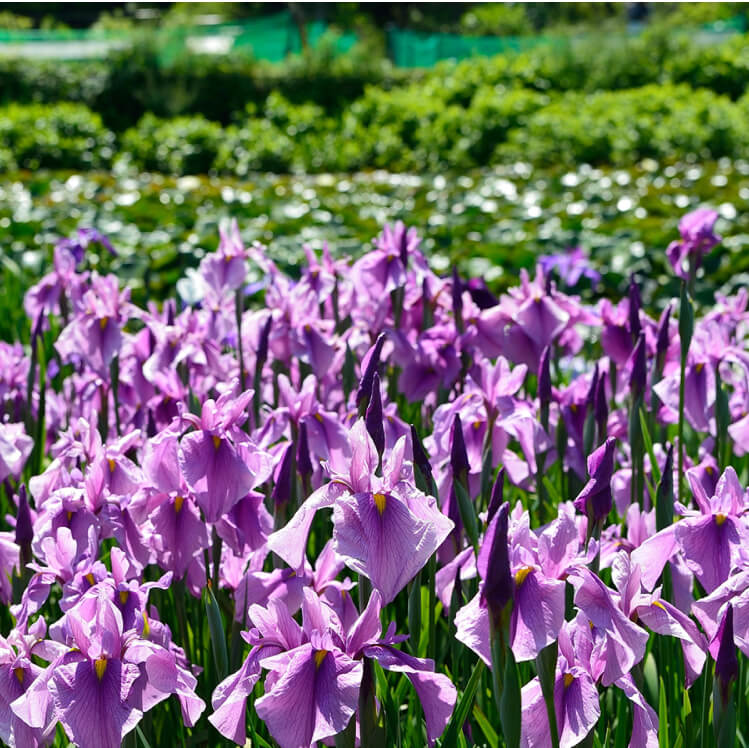 The iris garden is the centerpiece of Kamo Garden and is approximately one hectare in size and contains over 600 varieties of Japanese iris (hanashobu). All of the roughly 500,000 bulbs are hand-planted and replaced every year. Peak bloom is from late April until the end of June, making this period the park’s busiest season.

According to family legend, the original irises were brought from the distant Iwadeyama Castle in northern Japan during the early Edo period (1603–1867) by a noblewoman who married into the Kamo family. Irises are sacred flowers and were believed to ward off evil, and may have been planted in front of the main gate to ensure that no harm would befall the marriage.

During World War II, the size of the iris garden was severely reduced so that the land could be used for food production. It was restored to its current state after the war, and due to continued cultivation by the Kamo family, the garden retains its picturesque beauty to this day. 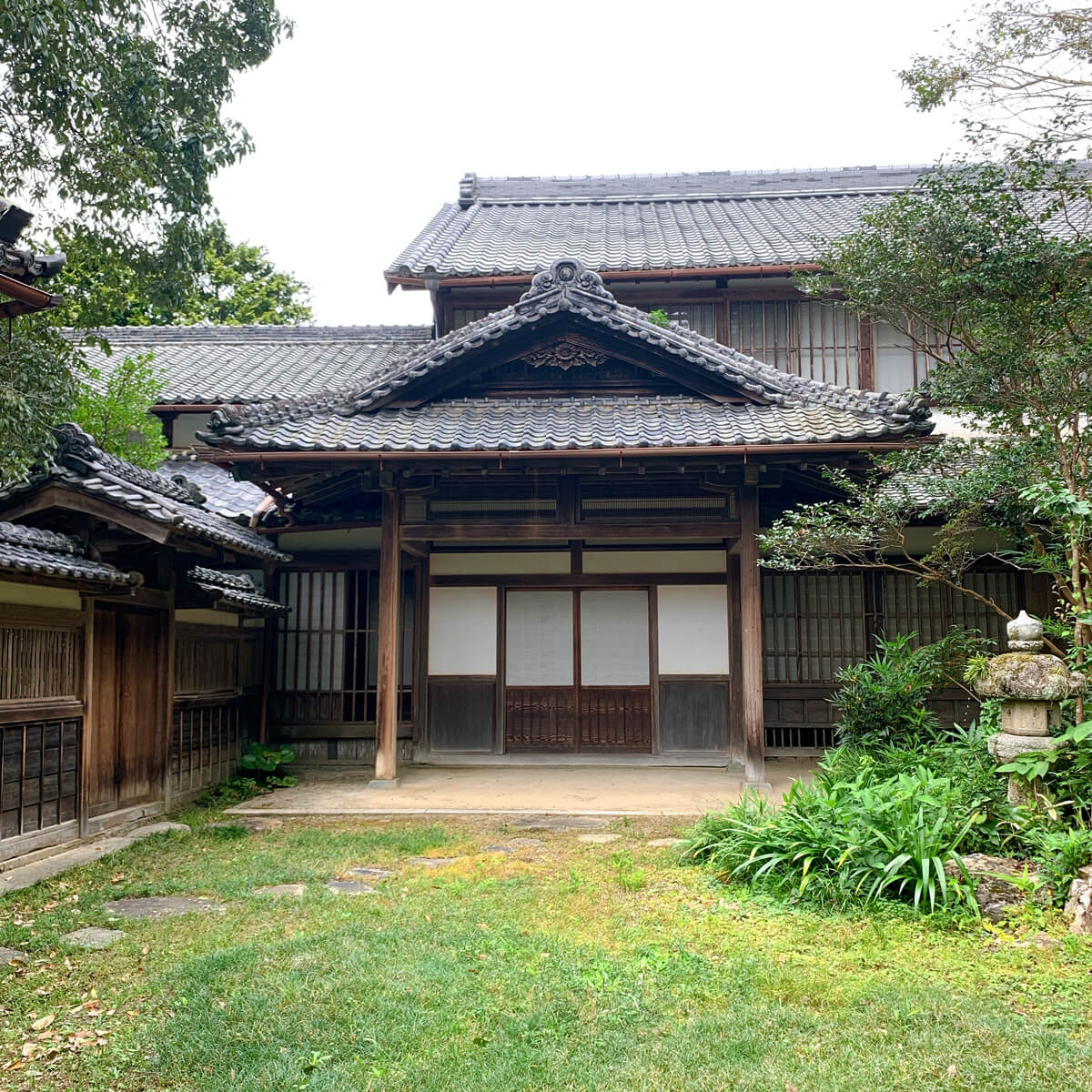 The Kamo family traces its roots to the Azuchi-Momoyama period (1568–1603) when members of the family served as local authorities, ensuring that agricultural laws were followed and regulating agricultural practices in the area. According to land surveys at the time, the family oversaw a large area of land encompassing much of what is now western Shizuoka Prefecture and beyond. By the end of the Edo period (1603–1867), the family was the most influential landowner in the area and had gained authority from the shogunate to branch into finance and banking. The family has in its possession several important documents from throughout Japanese history, such as letters from Tokugawa Ieyasu (1542–1616), the first of the Tokugawa shoguns who ruled Japan until the end of the Edo period in 1867.

After rule was returned to the emperor from the shogunate during the 1868 Meiji Restoration, the system of domains governed by daimyo lords assigned by the shogunate was abolished and the family lost many of its assets. By the end of World War II, the family had shifted its focus to plant breeding and gardening and developed its remaining land into Kamo Garden.

The buildings of the Kamo estate were built in 1773 on the eastern side of the Japanese iris pond, and have been the property of the Kamo family for over sixteen generations. Much of the timber used in the construction of the buildings was cut in the mountains surrounding the estate.

The grounds and buildings have been meticulously maintained, retaining details such as the raised tatami mat floor above the pounded-earth entranceway of the main building. There, people would pay their taxes to the village chief and his administrators. This administrative space looks out onto a traditional garden to the rear, replete with an ornamental pond with delicate moss-covered features. The entrance area also houses old clay ovens that are still in use today, along with large earthenware pots for making miso, a fermented soybean paste. The layout of the building and garden ensured the rooms stayed cool in summer.

In the smaller courtyard at the rear of the main building is a large, flat stone where palanquins would be placed to await their passengers. Nearby is a special entranceway that was used only by high-ranking visitors.

At the rear of the complex is a large room with sliding wall panels that open to the outdoors. Originally a place where miso was made, it has since been converted into a tea house. Green tea can be enjoyed there while looking out onto the moss garden. The estate is open to visitors year-round. 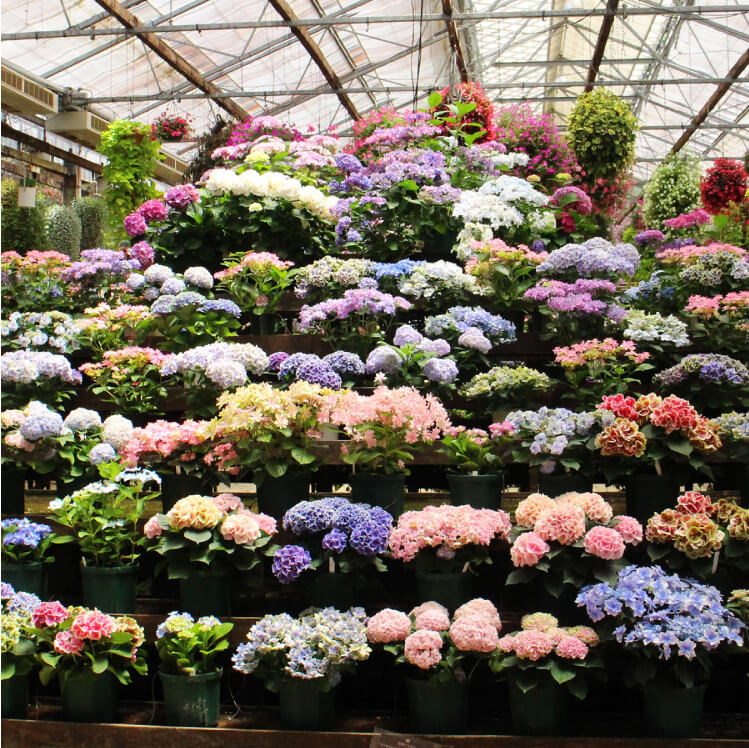 A large part of Kamo Garden’s business is its extensive flower breeding programs, which began in 1980. Since then, over 100 new flower varieties have been developed on site—mainly Japanese irises and hydrangeas, but also diamond lilies and primroses, among others. Japanese irises and hydrangeas grown at Kamo Garden are known for their high quality and are sold domestically and exported overseas. A significant proportion of the hydrangeas in Japan can be traced back to these gardens. Depending on the time of year, the greenhouse displays newly developed varieties, some of which have yet to even be named.

Fully developing a new variety to a condition in which it can be sold can take several years. Most of the new flowers are bred, registered, given names, and then made available for sale and export in the purpose-built nursery located a few hundred meters from the estate. Some of these flowers are also available for purchase in the gift shop for a limited period during May and June.