Hamanako Garden Park consists of 56 hectares of green, open space at the tip of a small peninsula in Lake Hamana, near central Hamamatsu. A wide range of gardens with thousands of plants and flowers from around the world are maintained within the park giving the park an overall appeal and presenting flora to suit all tastes. These include brightly colored tulips that bloom in the spring, delicate water lilies that thrive in summer, and Japanese maple leaves that turn golden in autumn.

The park offers numerous things to see and do, including the International Garden, a showcase of traditional gardens from across the globe; the Garden of 100 Flowers, filled with a huge variety of shrubs, flowers, and fruit trees; and the impressionism-inspired Flower Art Gallery cottage and gardens. Many of the facilities and gardens were originally part of Pacific Flora 2004, an international flower festival held on the same site. The success of that event led to the creation of Hamanako Garden Park the following year.

The park is surrounded on three sides by water, and panoramic views of the lake can be enjoyed on clear days. A 50-meter-high observation tower provides an excellent spot from which to survey the lake and fields of flowers below. The lake lends more than visual interest to the park, as it brings cooling breezes during summer and prevents heavy snowfall in winter, so that plants that prefer warmer temperatures can be cultivated in the gardens. 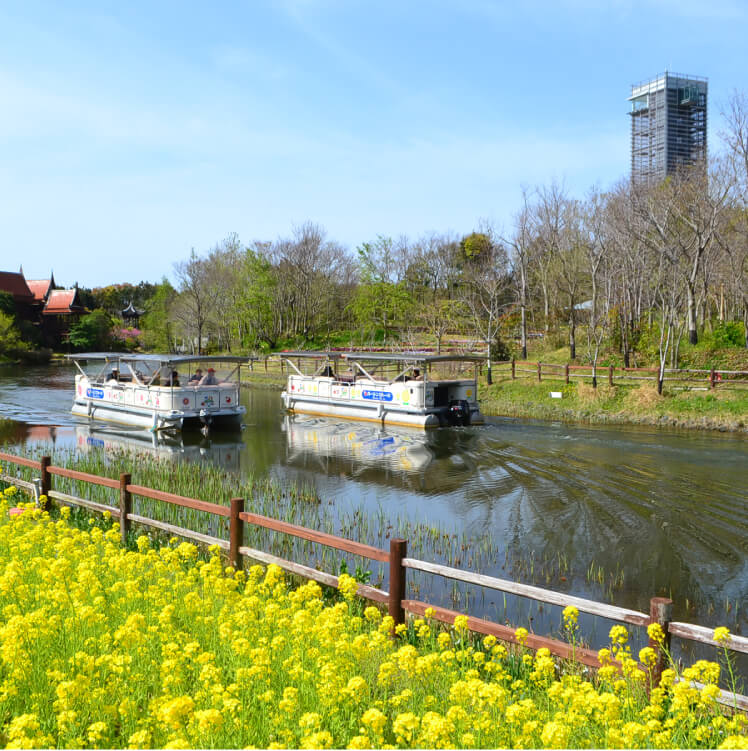 A garden cruise boat travels along the large man-made river crossing Hamanako Garden Park from end to end, providing a leisurely way to view the flower fields and surroundings of the park. Quadricycles that seat four people are available to rent and ride along the cycle paths. On the west side of the park is an open-air performance stage for concerts from a diverse array of genres from folk to jazz to J-pop, and across the river is a play area featuring water jets where children can play and cool down during the summer.

Many plant-themed events and seminars are held in the park throughout the year, including classes on how to grow and repot flowers and plants, outdoor yoga, and ground golf––a twist on the classic sport. The park’s restaurant serves a selection of seafood dishes using fresh local ingredients such as oysters and eel from the nearby lake.

Despite the lack of snowfall, a snow festival is held at the park every winter, bringing in real snow from Nagano Prefecture to create slopes for sledding and other activities. The park also draws around two hundred volunteer staff from the local community, who help with the maintenance required for the gardens and flower fields, provide expert gardening knowledge, assist visitors, and run educational programs. 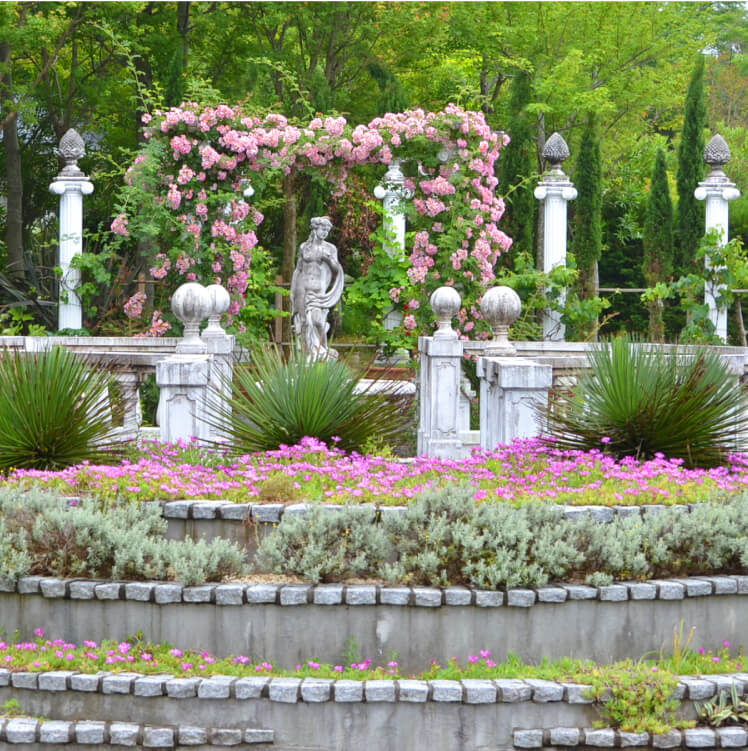 The International Garden showcases eight garden styles from around the world. One of the two Italian gardens is modeled on the bold shapes of a Renaissance garden, and is made up of tiered flower beds of sweet pink flowers bordered by white colonnades and water features. The second resembles a Tuscan garden from the middle ages, adopting the typical symmetrical hedgerows and tightly controlled conifers of that era.

Other gardens from Europe include a German garden, composed of three fountains encircled by an assortment of roses and buttercups imported from Germany. The neighboring Austrian garden pays homage to locally based musical instrument manufacturers Yamaha and Kawai, incorporating violin, piano, and treble clef sculptures sent from Vienna, another city famous for music.

Aboriginal rock art, desert grasses, and a small pool make up the Australian garden, which is based on the arid landscapes of the outback. The orderly flowerbeds and herbs of the English garden are inspired by the gardens of the West Midlands.

From Asia are gardens from Nepal, China, and Korea. Red brick structures are a prominent element of the Nepalese garden, as are the statues of Buddha surrounded by lotus blossoms. The Chinese garden contains a miniature mountain landscape inspired by the scenery of Zhejiang Province. The Korean garden is built to resemble a traditional rest spot, complete with a central pond and tile-roofed seating area.

The Garden of 100 Flowers 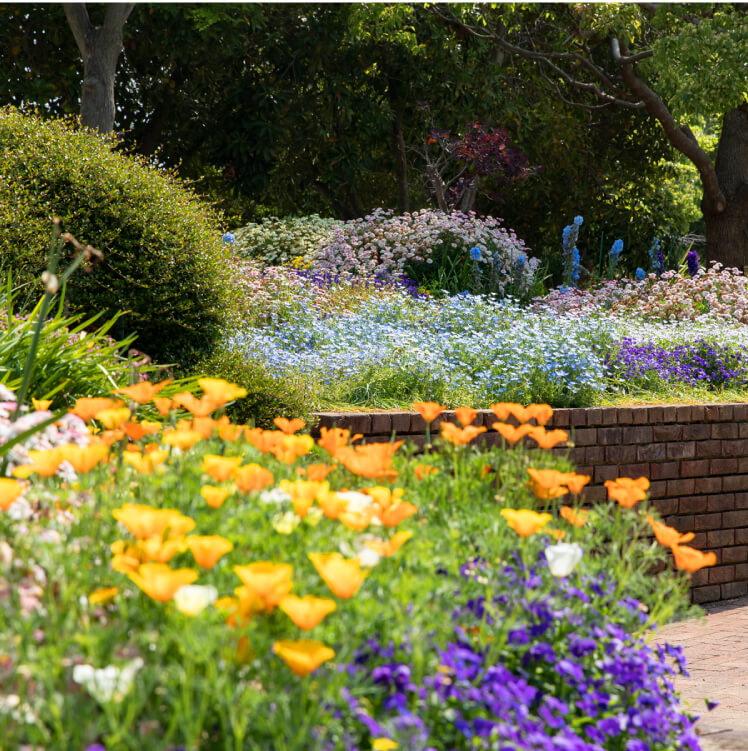 The Garden of 100 Flowers contains thousands of different plant varieties from around the globe, despite its name. A long path meanders past the numerous flowerbeds and gardens, and each section is devoted to a specific type of plant. These include flowering annuals and biennials, a diversity of greenery such as ferns, conifers, succulents, and bamboo grasses, along with fruit trees, climbing plants, and many more.

One of the highlights of the garden is the Wollemi pine tree, often called the “Jurassic tree” in Japan. Originally known only by its fossil record, which dates back to around 200 million years ago, a few surviving trees of this rare species were discovered by accident in 1994. Only about a hundred trees are known to exist in the wild, all of which are in New South Wales, Australia. The Wollemi pine responds well to cloning, and the specimen brought to Japan was split into two parts, with one part given to Hamanako Garden Park, and the other to Tokyo Disneyland. 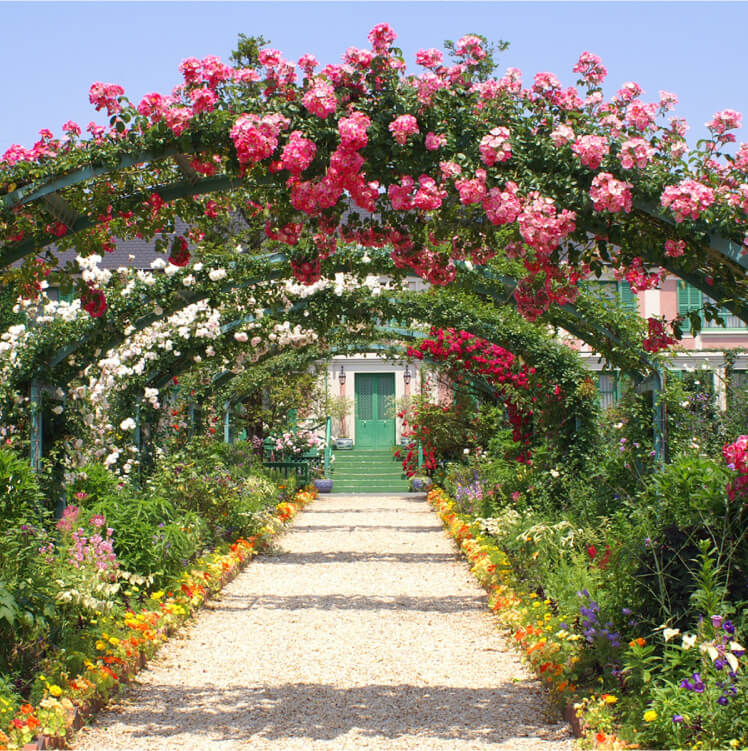 The pastel-colored cottage and adjoining garden of the Flower Art Gallery are modelled on French Impressionist paintings from the late-nineteenth century. The art gallery has remained a popular attraction of the park since it was installed as part of the Pacific Flora exhibition in 2004.

The garden is particularly busy in late spring when the thousands of roses in front of the cottage are in full bloom. There are over 250 rose varieties in the garden, some of which are used to decorate the elaborate “rose archway” tunnel which lines the main path. Other roses are displayed in neat flowerbeds or rows, arranged amongst vibrant tulips and cosmos. Roses grow particularly well in the area due to the lakeside climate which seldom dips below zero degrees Celsius.

The large lily pond was inspired by the paintings Claude Monet (1840–1926) created of the pond at his home in Giverny, France, and its lilies bloom in brilliant pinks and purples from June to October. The scene is completed with ducks and other birds that often visit the pond. 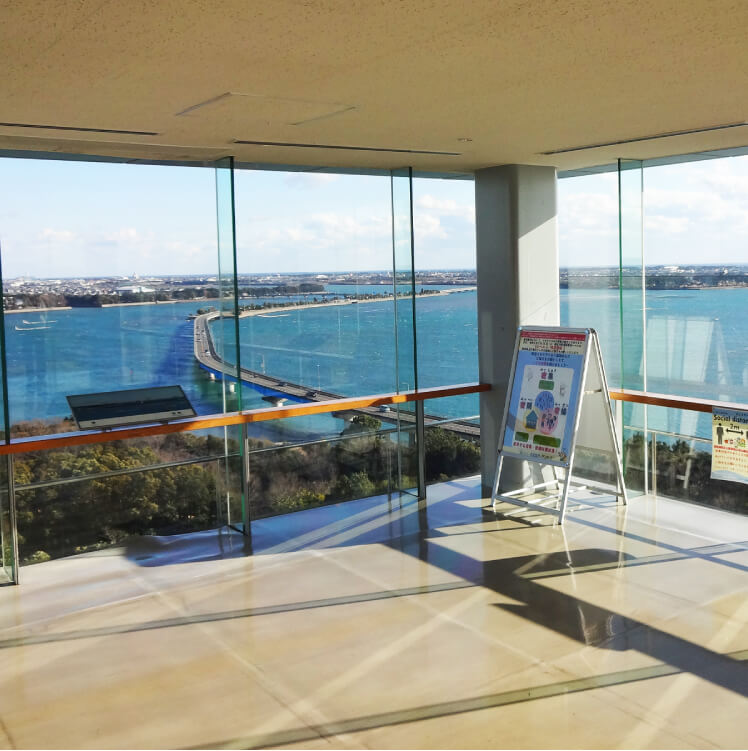 A 50-meter-high observation tower stands in the center of Hamanako Garden Park and offers sweeping views of Lake Hamana and the surrounding area. The top of the tower is accessible by elevator for a nominal fee. Mt. Fuji is visible on clear days, as is the point where the lake meets the Pacific Ocean. The lake and ocean were separated until 1498, when an earthquake altered the topography of the area and connected the two bodies of water. Lake Hamana is a source of cultivated unagi and hamo eel, which are a local specialty in Hamamatsu and are served in the park’s restaurant.

Below the tower are large flower fields planted with three types of flower per year in rotation, including sunflowers, cosmos, and Nemophila flowers. The flowers are often arranged to form shapes and words, and these original displays are best appreciated when viewed from high above.