Hamamatsu Flower Park is a botanical garden established in 1970 on about 30 hectares of land northwest of central Hamamatsu, bordering Lake Hamana. The park’s rolling slopes display a vast array of seasonal flowers, from domestic varieties to rare and exotic plants from overseas. Facilities include a large children’s play area, a gift shop, cafés and restaurants, and open stretches of grass where visitors are welcome to picnic. The proceeds of entry fees to the park are used in the upkeep of the garden and allow the caretakers to pursue new development in horticulture. The garden tulips and cherry blossom garden and wisteria trellis exhibit are illustrative of the work put into creating new floral displays. Discount tickets covering access to both Hamamatsu Flower Park and the adjacent Hamamatsu Zoological Garden are available. The majority of the park is highly accessible and benches and rest areas are placed at regular intervals. An electric cable car carries passengers, including those in wheelchairs and strollers, up and down one of the steeper slopes for no additional fee. A locomotive-themed “flower train” tour bus circumnavigates the park in 15 minutes and stops at five points along the way, making it a popular option for tour groups and those short on time.

Vision for the Park 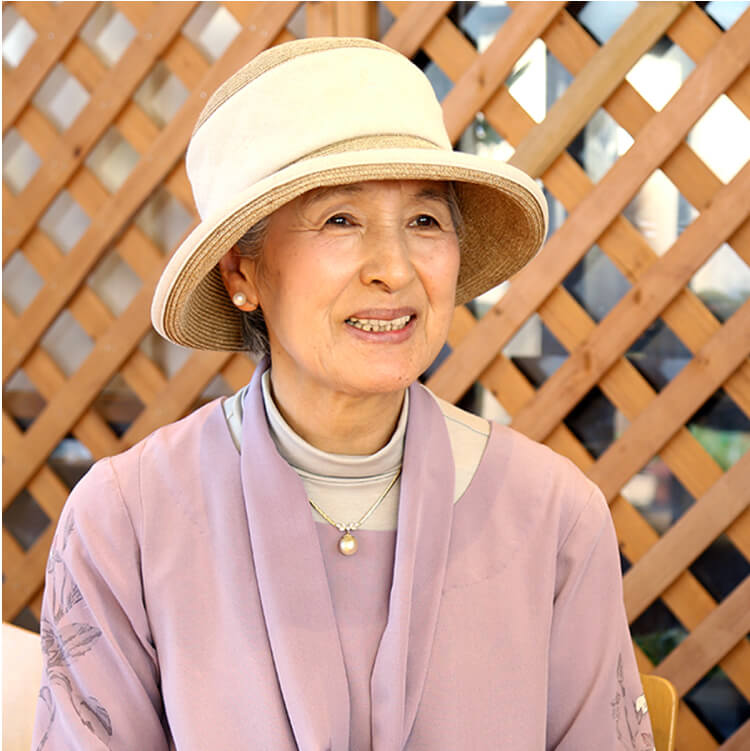 Under the direction of Tsukamoto Konami, the chief director of Hamamatsu Flower Park since 2013, the park has become renowned for its distinctive tulip and cherry blossom displays in spring. Moreover, the number and variety of events and educational seminars held at the park have increased, including new events such as art exhibitions and musical performances. Highly regarded and popular seasonal displays also feature prominently in the park’s event calendar.

Tsukamoto’s conviction that flowers and trees are essential to human well-being is reflected in her vision for the park. That ethos is nurtured in the park and clearly seen in the immaculately tended paths and gardens, maintained so that visitors, including those who may be suffering, may feel invigorated by their surroundings. 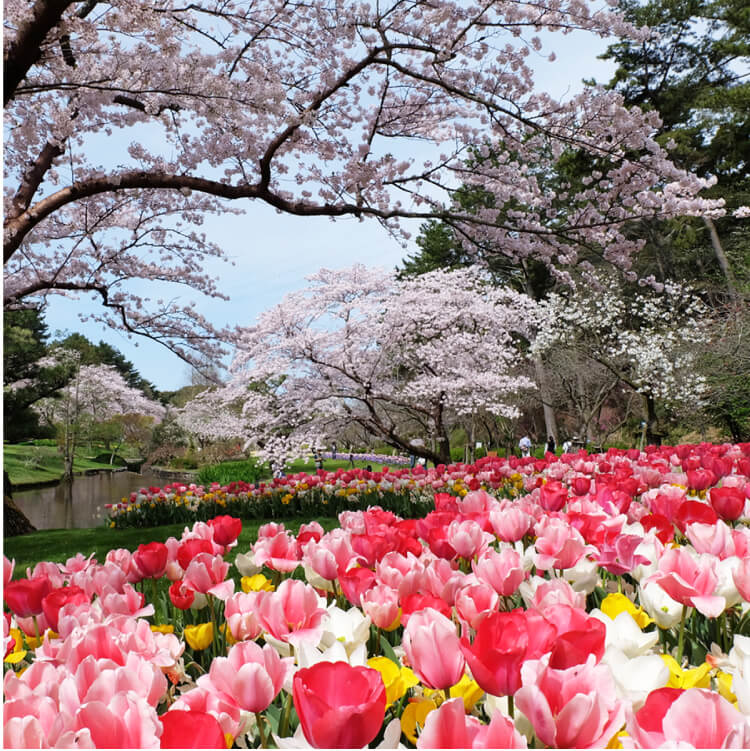 Flowers are the star attraction among the 3,000 plant varieties at Hamamatsu Flower Park. Many reach full bloom between March and June, and the tulip and cherry blossom garden is a sight to behold during its zenith. In early April, a multicolored array of Dutch tulips unfolds beneath 1,300 cherry trees, many in full bloom, with European grass completing the scene. Unlike Zoysia japonica lawn grass, European grass maintains its deep green color during the cold season. The rich green grass complements the brightly colored tulips and the cherry blossoms in the springtime.

The combination of vibrant European flora with delicate Japanese cherry blossoms creates an extraordinary landscape not seen elsewhere in Japan on such a grand scale. In the daytime, visitors can picnic under the trees, and at night the blossoms can be viewed in a different light as they are illuminated from below. 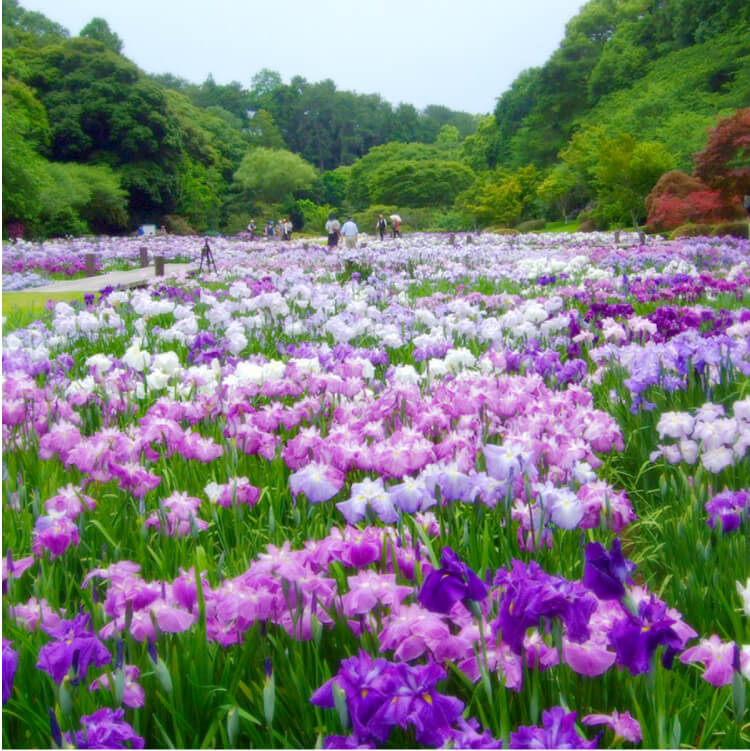 Cherry and plum trees display their vibrant blossoms in the spring, along with several different rose species, tulips, and pastel-colored hydrangeas. A lush Japanese iris garden is nestled in the northeastern area of the park, containing over 700,000 individual plants surrounded by a thick forest often filled with birdsong.

During the summer, the park is full of flowers that thrive in the heat such as sunflowers, zinnias, and honeysuckles. Lotus flowers are in full bloom in ponds in the north of the park, where hardy butter daisies and cheerful marigolds dot the landscape.

Autumn is heralded by chrysanthemums, a flower that symbolizes the Japanese Emperor, and which is commonly used as a design motif. The impressive red spider lily garden is another autumn highlight.

Winter brings chillier weather; however, many species of flowers and plants can still be enjoyed. Native flowers such as fukujuso, a small yellow flower, and robai, known as Japanese allspice but toxic if eaten, flower during this period, as do bright pink and white camellia shrubs. The park is also adorned with festive lights both inside and outside. 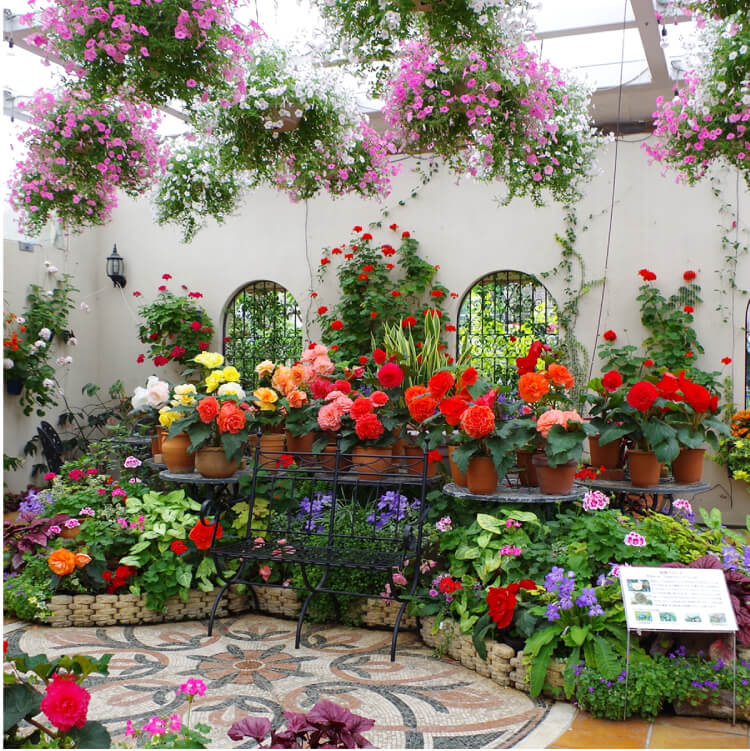 Just past the main gate and the Dancing Fountain is a large greenhouse. Nicknamed the Crystal Palace, the greenhouse gives the impression of a giant crystal. Inside is a large collection of rare and interesting plants from around the world.

In the center of the greenhouse is the Garden Theater, where vast and elaborate seasonal flower displays are changed five to six times a year. This space also houses a small café and is the main stage for the Christmas illuminations.

Just past the Garden Theater is the Bali Garden, which showcases a multitude of colorful tropical plants. The flowers, creepers, and fruit plants are changed periodically, and rare plants are always on display. One example is the black cat variety of the Tacca genus, one of the only species of plant in the world to grow black flowers with large drooping “whiskers.”

The final area in the greenhouse is the Mexican Garden. Filled with succulents, cacti, and wild desert flowers, the garden is a microcosm of plants in a dry, sandy wilderness. 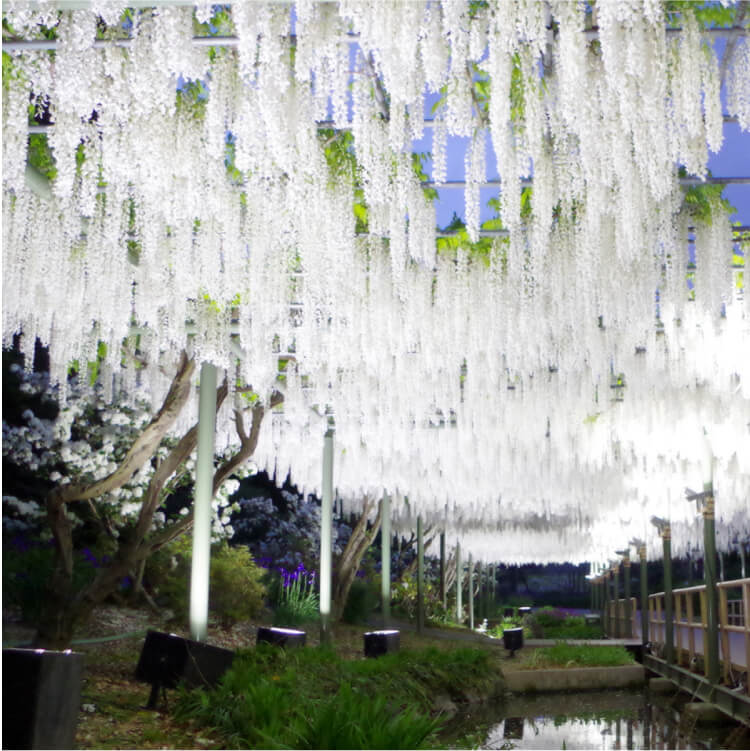 The high point of the elaborate wisteria displays is a 170-meter-long wisteria corridor, composed of overhead trellises that show off the wisteria flowers to best effect. The delicate flowers hang closely together, creating a curtain of purple and white from one end of the corridor to the other. These vividly colored flowers can be seen in their glory from late April to early May.

Other displays of white, pink, and multilayered wisteria add variety to the classic purple. These were developed by Chief Director Tsukamoto, with some displayed as bonsai, some as standing shrubs, and some grown in pots.

During the wisteria season, the park is open at night and the flowers are illuminated with carefully placed lights. These innovative methods of display demonstrate the park’s ethos of constant improvement.

Events and Other Attractions 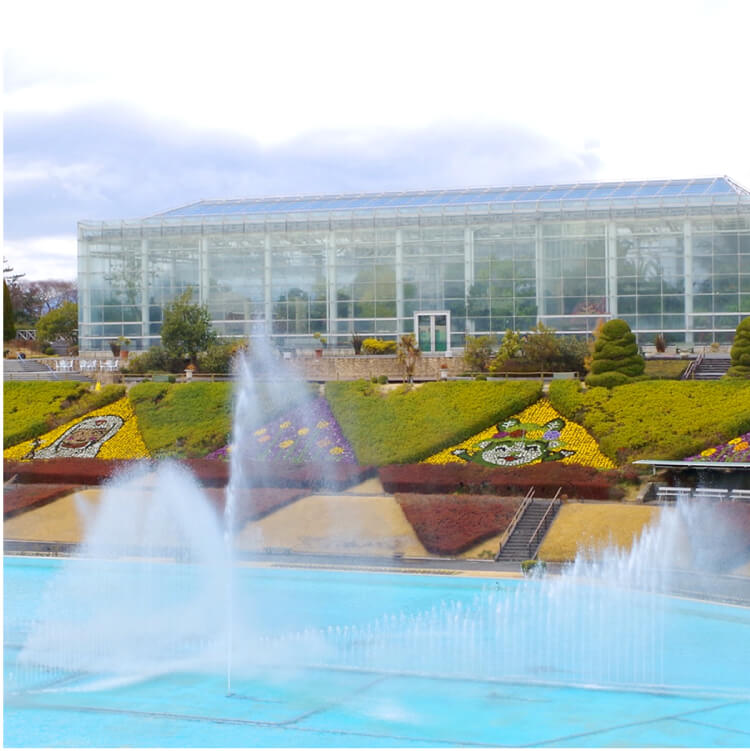 Various events are held at Hamamatsu Flower Park throughout the year including lectures, special exhibitions, practical classes on plant rearing, children’s nature events, and flower competitions. Art exhibitions, and even group walks and runs are also held within the park’s spacious grounds.

One exhibition features a man-made construction of over 100 varieties of chrysanthemum grafted onto a single plant, based on an art form which was originally developed during the middle of the Edo period (1603–1867). The exhibition takes place from early to late November every year.

Other points of interest include mosaiculture trees and bushes scattered throughout the park, and the Dancing Fountain. One of the mosaiculture sculptures is a large reproduction of the park’s mascot Furamaru that was created using flowers and plants chosen by local residents. The centrally located Dancing Fountain features “dancing” jets of water that shoot from it in time to music every 30 minutes. The music used for the fountain was played on instruments from local manufacturers Yamaha and Kawai, which both have headquarters in Hamamatsu.